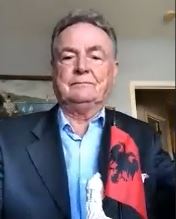 On the behalf of the 150,000 Chams, the Albanian-Greek Minority, who lived in their ancestors’ land for centuries but are now homeless due to ethnic cleansing by Greek Government:

Chams who lived in Southern Epirus (Chameria) now part of Greece, were the victims of the first ethnic cleansing in Europe at the end of the World War II. The Cham tragedy is one of the most painful tragedies of the European continent.

As a result of the 1944-1945 ethnic cleansing and genocide, 30.000 Albanian Muslims were violently expelled from the Chameria region, and sought refuge in the Republic of Albania, where they still live. Today, there are 150.000 members of this population in Albania, a figure that has grown because of the high birth rate of the population. On the other hand, current number of Cham Orthodox living in Greece is estimated at around 100.000. Yet these people are deprived of every sort of minority rights including speaking Albanian in public.

During the June 1944-March 1945 period, 1286 persons were killed in Filat and Paramithi, 192 people were killed in Gumenica, and 626 persons were killed in Margellic and Parga. There were hundreds of other missing persons. In the same period, as a result of Greek massacres, acts of robbery and rapes against the Albanian population of Chameria; 2900 young and old men, 214 women, 96 children were massacred, 745 women were raped, 76 women abducted, 32 children, younger than 3 years were massacred, 68 villages were razed to the ground, 5800 houses and places of worship were burned down or destroyed. Furthermore, 30.000 Albanian Muslims were violently expelled from the Chameria region that took refuge in the Republic of Albania.

To this day, the Greek Government has ignored its responsibility for the crimes and atrocities perpetrated. It continues to act as though nothing has happened and refuses to address the Cham’s issue.

Through the Greek alliance with Milosevic, we have witnessed the Kosovo ethnic cleansing similar to the Cham’s people in 1944 through 1945.  Also, the Greek Government continues to deprive the Albanian Orthodox Minority in Greece the right to their language, education, customs, and their human rights – the same rights that other minorities in the world enjoy. It is appalling that the country where democracy originated, Greece, a member of the United Nations and European Union be allowed to have such a miserable human rights record. Chameria was part of Albania until 1913 when the European Ambassadors in London, under pressure from the Greek Government, decided to adjust the borders and make Chameria part of Greece.